Develops and implements policy, techniques, and best-practices for motion picture advertising and production.  Skills include: technical operations and asset management; management of post production supervisors, assistant editors and production assistants while assuring positive communication with counterparts at the major studios.

Well known for the ability to liaise with studio marketing teams and in-house producers to finalize the look of trailers, digital promos and television spots used in the marketing of major motion pictures and popular internet and television content. 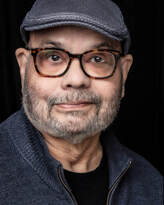 Poet, photographer, and filmmaker, Jerry Garcia was raised in the corner of East Los Angeles that became Monterey Park in Southern California.  He spent his childhood fearing “The Bomb” during the cold war, was a teenager during the fabled “Summer of Love” and studied Communication Arts during Richard Nixon’s Watergate Era. His poem, Interstate 60 tells the tale of the freeway that tore through his neighborhood during his adolescence. He is too old to have been named after the guitar hero of the same name, but can rock and roll just the same. These are the circumstances that inform his writing with references to pop culture and mid-20th Century history. Garcia has served the iconic Beyond Baroque Literary Arts Center of Los Angeles in various capacities including president of the board of trustees. He is a producer and editor of television commercials, documentaries and motion picture previews. His poetry has been widely published online and in print, including:  Wide Awake: Poets of Los Angeles and Beyond (Pacific Coast Series), The Coiled Serpent Anthology (Tia Chucha's Press) and his newest collection Trumpets in the Sky (Moon Tide Press.)